NOTE: This was originally published May 22, 2014, on Insightful Accountant, but I’ve updated it to reflect unwanted punctuation and title edits, and update on what the state of my depression and anxiety four years later.

Here I am, writing about depression and anxiety four years after my first article on the topic was originally published. I’m still having the same discussions and personal struggles with depression and anxiety. While I know there are a bunch of blog posts and articles being written about this recently, I haven’t seen many in the accounting space. Frankly, I don’t think we can talk about it enough.

Depression. Anxiety. Historically most people haven’t been too comfortable talking about either. In fact, when I first wrote this piece, I asked no less than 7 other fellow accounting professionals who I knew at that time were either currently suffering or have in the past with these issues if they’d let me quote them in this article, and only one was comfortable enough to say yes.

This time, I put a call out to see if anyone would be interested in sharing their experiences and the result was even lower. Only 2 people were willing to share, and here’s the story from the first one; she asked to remain anonymous: 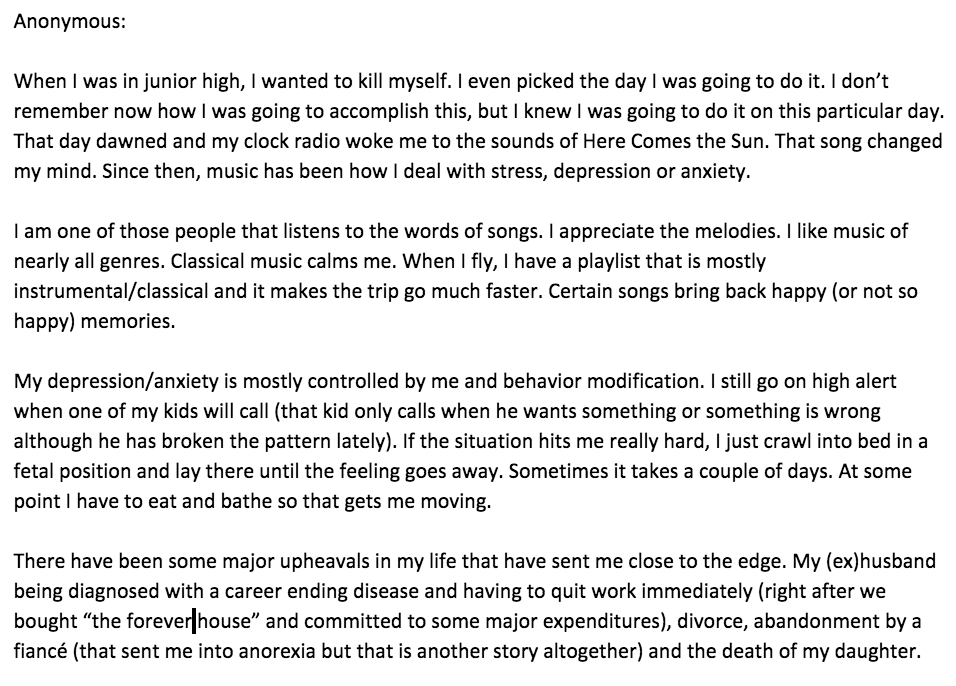 I get it – I totally get it. Many people still perceive depression as something you can just “get over”. Or as a sign of weakness. Or… whatever. In the accounting industry, I think many  are worried that our clients won’t have the same confidence in us if they know we have these sort of struggles. Or worse – they won’t trust us with their accounting needs.  It doesn’t really matter what the reason is, right? Some people still dismiss depression, or don’t want to talk about it. Luckily, that is FINALLY changing. I’m seeing more people sharing their stories on social media, and the supportive response from complete strangers fills my heart. The conversation is shifting and it’s about damn time.

The second person I spoke to was Amanda Hinzmann. Here’s her story:

I recently read one of the most accurate descriptions of depression: “Depression is a thief. It sneaks into your heart and steals from you your passion: not only your power to conjure enthusiasm but also those exact things that once, that maybe all your life, excited you.”

A couple of years ago, I wrote an article about how it can be hard for me to find the time to get in a bike ride every day. While I was talking to some colleagues, I mentioned that for me, finding that time isn’t about looking good in my favorite pair of jeans – it’s about my mental health. Getting on that bike or going for a hike in the woods as often as I can is a crucial part of the way I treat my anxiety and depression.

Depression and anxiety run in my family.  I’d never experienced either until after our daughter was born in 2002. I didn’t realize it at the time, but I had a serious case of postpartum depression. It wasn’t until our son was born in January of 2009, and I was finally diagnosed with PPD the following summer that I realized I’d also had it with our daughter.

After our son was born, it took me a while to recognize that something was wrong, even though the signs were there all along. One major sign was that I would panic if I couldn’t get to my breast pump every two hours to pump milk for him  – even though he took a bottle of formula or milk – he didn’t care, he just wanted to eat! Another sign was that I wouldn’t carry him in my arms over concrete – I would only carry him in his car seat to take him to the car or in a baby wrap when I had to go in the basement, because I was afraid I would drop him. Let me repeat that: I was afraid I would drop him. I’ve never dropped a baby – mine or anyone else’s – but I was 100% positive that I would drop him each and every time I stepped foot on concrete. The most fucked up, irrational, anxiety-is-in-control-of-my-brain part of this? WE HAD HARDWOOD FLOORS EVERYWHERE ELSE, so dropping him anywhere else in the house would have been just as catastrophic.

Then there was the utter pit of despair I fell into when I thought I might not pass my QuickBooks Desktop Advanced Certification Exam. Because my go-to defense mechanism is humor, I make jokes now about how it made me cry because it was a difficult exam, but the reality was that more than once during the test I broke down sobbing. I mean unable to function, couldn’t catch my breath sobbing. Not just because of the exam, but because my brain was telling me that if I didn’t pass, I would lose all my clients, my business would fail, and my family would end up living in a van down by the river.

The final straw – or straws, I should say, was when my son started daycare; I would have these debilitating anxiety attacks if I wasn’t at least in my car to go pick him by 3pm, if not already there by then. For the record – that time deadline came from nowhere. There was no reason that I was required to get him at that specific time. Our daughter got out of school at 4pm, and I could pick him up either before her, or after. It didn’t really matter. But because of my depression and anxiety my brain told me that it did matter, and it was crippling.

I felt like I was losing my mind. I couldn’t focus. I was forgetting to finish stuff for work and then remembering at 3am – which meant getting up and working in the middle of the night. With a new baby and minimal sleep, I struggled to keep myself and my business together.

I was plagued with self doubt, and had no motivation. I had mysterious physical aches that made it so that I was barely able to get out of bed. When I look back at my year over year P&L,2009 has the lowest numbers in the all the years I’ve had my business. It wasn’t hard just because I had a new baby. I had plenty of friends, family and a fabulous daycare to help with him. It was hard because of the depression and anxiety. I wasn’t working as fast as I normally do, I had to check my work more often, I was struggling to make basic business decisions, and didn’t have the motivation to go out and get new clients. It was completely overwhelming.

I finally went to the doctor and explained what had been going on, and we decided, at the time, to try Wellbutrin and therapy. We tried a low dose, and chose Wellbutrin specifically  because it had the least amount of side effects. Within a week, I remember texting my husband and telling him: “I love these meds. This must be how normal people’s brains work.”

After just a few weeks, I noticed the difference. Better concentration, the anxiety attacks were dwindling, I had more motivation and the therapy was giving me the tools to deal with the attacks when they did happen and to recognize and avoid triggers. I was more efficient at work, seeking out new clients, looking at streamlining the processes I had in place, and rewrote the ongoing five year plan I had for Kildal Services LLC.

My doctor had mentioned that because of my family history, I would most likely be on some sort of medication for the rest of my life, but at 36, I wasn’t really ready for that as an option. Don’t get me wrong – if that’s what it takes, then I’m a firm believer in Better Living Through Chemicals. However, in 2012, I approached my doctor and my therapist and asked what we could do to start weaning me off the medication. After much debate and research, we decided on a plan that involved drastically changing how and what I eat, adding some amino acid supplements and rigorous physical activity, and the key, we decided, was that it had to be something I LOVED. There were some false starts – like when I hired a personal trainer and didn’t enjoy or really benefit from it, but I finally found a routine works for me, and that just getting on a bike and going one thing that really helps.

When I first wrote this, I had been off meds for about a year. Things have changed in the 4 years since then. I had to have a couple major surgeries in 2015 & 2016 that required a bit more recovery time than expected, and after a few years of no medication, my doctor and I decided that I should take something to help me sleep. The combination of all these factors resulted in a perfect storm – the anxiety was pretty much under control, but since I couldn’t exercise as much as I wanted or needed to, I ended up gaining weight. Combining  that with some new found food allergies and my depression sidled right up beside me again, and like the thief that it is, it slowly stole my motivation, enthusiasm, curiosity and joy. You’ll notice that this is the first post here on StacyK.net in months… and that sneaky thief is the reason.

We’re currently working towards finding that sweet spot that many of us with anxiety and depression take so long to find: what prescription (or combination of prescriptions), combined with therapy, exercise and diet will help reduce my symptoms, and offer the least amount of side effects?

Back in 2014 I wrote: “I try to ride 8 -12 miles every day, but that doesn’t always happen. I rarely have anxiety attacks, I’m probably happier and healthier than I’ve ever been in my life. I can, however, tell when I haven’t been on a bike in a few days – less focus, I’m jumpy, I snap at my kids more and slack off from work – I can literally feel myself sliding down that slippery slope. All of that doesn’t mean I won’t someday be taking Wellbutrin, or something else. I’m pretty sure that I will.” The difference with my depression and anxiety four years later is that I think I’m worse at recognizing it. With all of the recent suicides in the news, I’m seeing a lot of “ask for help” advice. The problem is that sometimes it’s hard to even recognize that we need help, let alone have the energy to ask for it.

It’s always a good time to talk about mental health. If you know someone that suffers from it, check in with them, and make sure you have contact information for other people that are close to them. I’m lucky as hell and so grateful to have a best friend that checks in on me whenever he sees me sliding down that slippery slope – and he’s not afraid to reach out to one of my sisters on Facebook or text my husband to give them an alert.

I’m not sharing all of this with you because I think everyone should exercise to get off meds – or that everyone should be ON meds – that’s missing the point. I’m sharing this because I think depression is a common issue that makes people squeamish to talk about and I wish it didn’t. I’m sharing this because I’m hoping that if you see parts of yourself in my story and the stories that others were willing to share with me, that you’ll take the first steps to seek out someone to ask for help.